Part 3 of my Disney Analysis.

Despite my love for Disney films, I acknowledge that not all of them are, well, good. But after working on the last two posts, I wondered what effect those characteristics have on how well a movie is rated. Do critics share Disney’s sense of justice and just want to see those villains die? Do audiences actually prefer movies with male protagonists, as much of Hollywood seems to believe? To find out, I collected the tomatometer scores of all of the movies from my list on RottenTomatoes.com – both the critic score and the audience score as, though there is a correlation between the two, it’s a moderately weak one.

I mostly included this because I wanted a graph that wasn’t a box plot.

So first, let’s look at the fates of the villains vs how they scored. I create two plots: one for the critical scores and one for the audience scores. 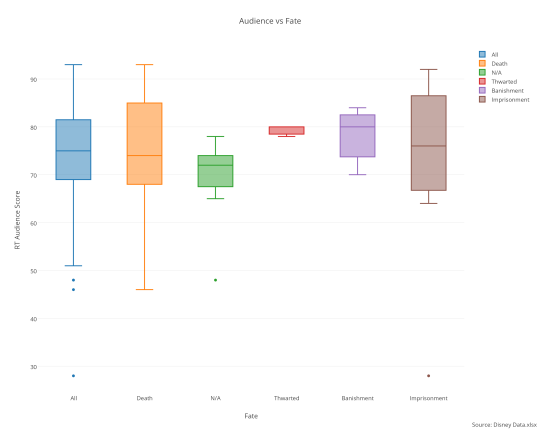 From these I can conclude…that there’s not much connection between the fate of the villain and how audiences react. We can say that there is a slight audience preference for movies that actually have a concrete antagonist, and we may also be able to say that critics and villains have a slight preference for movies where the antagonist is merely thwarted, but it’s not a strong connection.

What about gender, though? How much does that have an effect? Let’s look at villain gender first.

The conclusions I can make? People love those lady villains! Despite the fact that 70% of villains are male (or maybe because of that fact), audiences and critics agree that the movies with female villains are better movies across the board. (The audience preference for female villains is not as strong as the critical one, but it’s still there.)

And as for the protagonists?

So what could Disney learn from all this? Well, that clearly we want to see a movie with a pair of heroes, male & female, that face off against a female villain and defeat her without killing her. So make that happen, Disney.

(Oh, what? The next movie has a male protagonist and a male villain? Go figure.)