Fighting for the Center

At the Math Games morning session at Twitter Math Camp 15, we’ve been created curricular games that hit on some topics that there aren’t really good games for. I came up with the idea for this one, and worked on refining it with the help of Paula Torres (@lohstorres1) and John Golden (@mathhombre).

This game is about measures of central tendency (and range for good measure). Not only do students have to determine all of those over and over as they play the game, but they can see how changing the data set changes the values, especially as the size of the data set increases or decreases. It seems really good because it drives the need to make those calculations.

All you need is two decks of cards. The game is designed as a two-player game, but it would definitely be best done as two pairs playing against each other, so they can talk to each other about their strategies and calculations. We also recommend having students keep a running tally of the values.

How to Pack Your Boardgames

Last year, before Twitter Math Camp, I was packing and trying to figure out which games to bring with me for the game night we were having before the conference started. I basically had three attributes I was considering: how big the game was, how good it was, and how many players could play it. I wanted to minimize the first one while maximizing the latter two.

So I tried to come up with a bunch of formulas for figuring it out, but nothing was quite working out. (I used BoardGameGeek ratings for “how good it was.”) At first I tried doing

, but it was putting some games that just weren’t very good as top choices. The problem was that the volume was having too big of an effect – games could come in thousands of cubic centimeters of volume, but max at around 8 for rating and 12 for players. (I had to use amazon.ca to look up the dimensions because I wanted to use centimeters.)

So then I tried cube rooting the volume, or doing an exponential functions like

, or finding the geometric mean of the three numbers, but still nothing came out right.

I was basically using three games as test cases: Dominion, which is one of the best games I own but it really big; Pixel Tactics, which is one of the smallest but is only 2 players; and The Resistance, which is small-ish, really good, and can go to 10 players. I figured that any good method should tell me to leave the first two games at home, but to bring the Resistance. If they didn’t, it wasn’t right.

Eventually, after doing some research, I determined that a common technique used in psychology when comparing variables of different ranges of values is called standardizing the variables. Basically, for each attribute, I would find the mean and standard deviation. Then, for each game, I would subtract its value from the mean and divide by the standard deviation to get a standardized value. Then I just needed to add up the three standardized values and the ones with the highest score would win. And, as predicted, The Resistance came out on top. 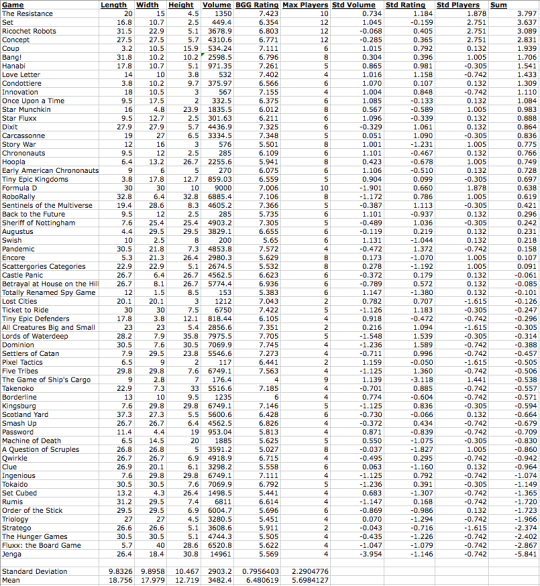