Growth vs Fixed Mindset on NPR

I was listening to the episode of Wait Wait…Don’t Tell Me! yesterday with Neil deGrasse Tyson yesterday (I’m almost as behind on podcasts as I am on blog reading), and I noticed the following exchange between Peter Sagal and Tyson after he loses the game.

SAGAL: I have to say, this is a strange moment because, as listeners know, I usually like people to win and I often give hints, but I was so pleased by the idea of fooling you that – Neil DeGrasse Tyson – so, like, by doing this, I therefore, by the rule of succession, become the smartest person in the world.

SAGAL: I have slain the dragon – you know, it’s like…

TYSON: So I look – I look at it differently. I look at had I gotten all three right…

TYSON: …I would’ve learned nothing. But having gotten two wrong, I learned two things today.

SAGAL: There you go.

So (as to not assume across the board – just in the particular example), not only does Tyson demonstrate a growth mindset, as is obvious, but we see Sagal talking about the typical fixed mindset – wanting to show his superiority and prove his “worth,” so to say. It was a pretty clear constrast. And if you’re looking for growth mindset role models, it’s hard to do better than Neil deGrasse Tyson.

On Friday our school was supposed to have a Quality Review, but it was canceled at the last minute. (That’s a whole ‘nother story.) But that pushed me to do a lesson that I probably wouldn’t’ve done otherwise, so that’s good. I actually think it went pretty well.

I noticed in our last exam that I should probably explicitly teach angle chasing as a problem solving strategy, so I asked the MTBoS for some good problems. Justin Lanier came through in the most wonderful way. So I picked out some problems into a nice sequence that would use a bunch of the theorems we’ve already done.

I wanted the students to work as a group up on the whiteboards, so I gave each person in each group a different color marker. I then had the students write a key in the corner. Each student’s color represented 1-3 of the theorems that they would have to use to solve the problems. Then they would draw up the diagram of the problem. As they went through, each person was only allowed to write when their theorem was used to deduce the measure of the angle. That way, with the colors, I could actually trace through the thought processes they used to solve the problem, which was really nice. (I wonder if I can use that as an assessment some how, having students trace through the same process. Maybe as a warm-up, once I get my smartboard working again.)

Here’s some pics of their great work. 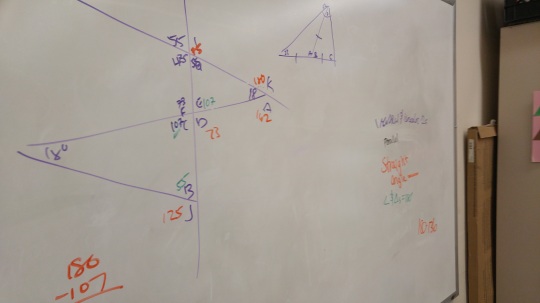 Sometimes I just have one of those classes. (Well, we all do.) The behavior’s not been that bad, really, not at first. But it slowly slips away from me. I need to do something to get things back on track, because none of the other little course corrections I’ve been making have been working. So I turned to something I’ve done less than a handful of times before – I gave the whole class the silent treatment.

I first did it my first year of teaching, out of actual despair at how I felt I was being treated. That day, with that class, I wrote them a letter explaining how I felt and what I was doing and projected it onto the board. They felt bad, but were only marginally better. The next day it continued, they realized I meant it, and it got better.

Now I don’t really take it to heart, but I still think it is an effective thing to do. When students talk over for you, most often they take it for granted that someone else heard and can explain it, or that I’ll come over and explain it to them personally, or various other reasons. Those all come to relief when I stop talking.

They came in today and I handed out their cards for their seats, but no high fives today, which was the first omen. Then I went around and serenely place a written task in front of each of them. One student, at this point, says “Why are you so calm?!? It’s making me mad!” That was unexpected.

I got through the rest of the class with a mixture of gestures, pointing, and writing on the desks. Often a student would ask me the same question another student already did, so I would point them to what I wrote on the other student’s desk. Some of the students tried to take charge and guide the class through getting on task, but only with moderate success. Many students begged me to talk to them. Then, at the end of the period, I verbally wished them a good day, which they all took with a breath of relief.

One thing that sticks with me, though, was how this made it clear that I talk way too much in class. And I didn’t even think I talked that much! But left without my guiding words, students had to struggle with the task on their own, knowing that I would be of only limited help. It made me realize that maybe I’ve been too quick to help recently, and I need to pare it back (though my students would certainly argue the opposite). But I took that feeling to heart and, in the subsequent class, I decided I would still keep my talking to a minimum (though I did talk occasionally).

So maybe it’s something to keep in mind, even without the classroom management angle – when my words were few, each one had more meaning.

Stressful as it is, I am loving teaching new courses. When I first start teaching, I felt like I was learning new stuff all the time, stuff about algebra (and how it connects to other courses) that I didn’t know I didn’t know, and now it keeps happening with geometry, especially with the more transformational tinge CC geometry has.

One of the things that struck me was, last week, when I used this Illustrative Mathematics task as a follow-up to my lesson about the diagonals of quadrilaterals. I feel like the understanding I had internalized that you can prove triangles congruent with less information because they are rigid structures, but quadrilaterals are not, so there are no quadrilateral congruence theorems. But I realized that’s not true.

Here’s a non-parallelogram example. Here are two isosceles trapezoids with the same diagonals, same legs, and the same angle between the diagonals and one of the bases, but the trapezoids are not congruent. But that’s because, when you look at the triangles, we have Angle-Side-Side, which we all know is not a congruence theorem. If, instead, we had had SSS (a leg, a base, and a diagonal), then they would be congruent.

We are starting to gear up for TMC16, which will be at Augsburg College in Minneapolis, MN (map is here) from July 16-19, 2016. We are looking forward to a great event! Part of what makes TMC special is the wonderful presentations we have from math teachers who are facing the same challenges that we all are.
To get an idea of what the community is interested in hearing about and/or learning about we set up a Google Doc (http://bit.ly/TMC16-1). It’s a GDoc for people to list their interests and someone who might be good to present that topic. The form is still open for editing, so if you have an idea of what you’d like to see someone else present as you’re writing your own proposal, feel free to add it!
This conference is by teachers, for teachers. That means we need you to present. Yes, you! In the past everyone who submitted on time was accepted, however, this year we cannot guarantee that everyone who submits a proposal will be accepted. We do know that we need 10-12 morning sessions (these sessions are held 3 consecutive mornings for 2 hours each morning) and 12 sessions at each afternoon slot (12 half hour sessions that will be on Saturday, July 16 and 48 one hour sessions that will be either Saturday, July 16, Sunday, July 17, or Monday, July 18). That means we are looking for somewhere around 70 sessions for TMC16.
What can you share that you do in your classroom that others can learn from? Presentations can be anything from a strategy you use to how you organize your entire curriculum. Anything someone has ever asked you about is something worth sharing. And that thing that no one has asked about but you wish they would? That’s worth sharing too. Once you’ve decided on a topic, come up with a title and description and submit the form. The description you submit now is the one that will go into the program, so make sure it is clear and enticing. Please make sure that people can tell the difference between your session and one that may be similar. For example, is your session an Intro to Desmos session or one for power users? This helps us build a better schedule and helps you pick the sessions that will be most helpful to you!
If you have an idea for something short (between 5 and 15 minutes) to share, plan on doing a My Favorite. Those will be submitted at a later date.
The deadline for submitting your TMC Speaker Proposal is January 18, 2016 at 11:59 pm Eastern time. This is a firm deadline since we will reserve spots for all presenters before we begin to open registration on February 1st.
Thank you for your interest!