How to Lie with Statistics – Stations

I base my statistics unit on the book How to Lie with Statistics, by Darrell Huff, because I think it contains a lot of really important information that everyone should know to live their lives and to stop themselves being taken advantage of. (Which is one of the majors benefits of learning math, as it’s so easy for people who know math to swindle people who don’t.)

The problem is, though, all that important information that I think is so critical is not that important in the minds of the NY Board of Regents. Last year I went ahead and taught the whole unit around it anyway, but I’ve learned the errors of my ways when I found that my students were lacking in, say, the ability to make a box-and-whisker plot.

To compensate, I (along with my fabulous co-teacher) did a one-hour lesson that I broke up into stations, with each station representing a different “Lying Technique” that I wanted the students to learn about. (I had already covered The Sample with the Built-in Bias and The Well-Chosen Average as a normal lesson prior, because those are still relevant topics.) Each station lasted about 10 minutes, with some time for wrap-up and transit.

I also did this to support the project I had them working on, which is the topic of another post.

They Don’t All Go So Well

I’ve known what my next post was going to be about for some time, which is why it’s been so long between posts, as I’ve been putting it off. The failures are less fun to write about, but it’s just as important when your lesson is a bust. Now I have lots of other things I want to write about, so more posts in the next few days.

Shortly after my successful Egyptian Fractions lesson, I wanted to tie a lesson into another ancient society they were learning about, so I decided to teach the Mesopotamian Number System. The idea was that we’d reinforce some ideas about exponents, place value, and scientific notation by working with another base.

The problem: working with another base is hard, especially if you’ve never done it before, and sexagesimal is not a great place to start, even with the boost I got with the fraction lesson. Introducing the idea with binary probably would have worked, but I didn’t have the time to do both and also teach the cuneiform and do the activity. Unfortunately, to save the activity, the basis of the understanding got cut. Which left me with a fun but useless activity.

I used hours:minutes:seconds as an analog to help understand base-60, but because they got that they couldn’t move past it. I gave them numbers to translate and had them carve cuneiform tax tablets (and they learned about Babylonian taxes), but that didn’t work out too well.

And then I didn’t even get nice product to display for too long, because they were too brittle. 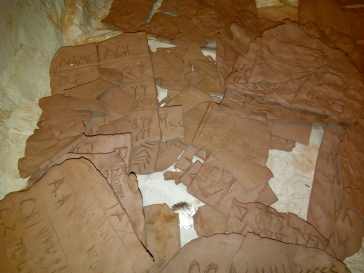 As I said. A bust. Or rather, busted.