For the past two lessons I’ve taught about sets, including set notation, union, intersections, and complements. To practice what they’ve learned, I had them play a game called What’s My Set? I originally came up with the idea because I wanted the students to get out of their seats in the middle of the double period, and so organizing themselves into the sets seemed like the way to go. 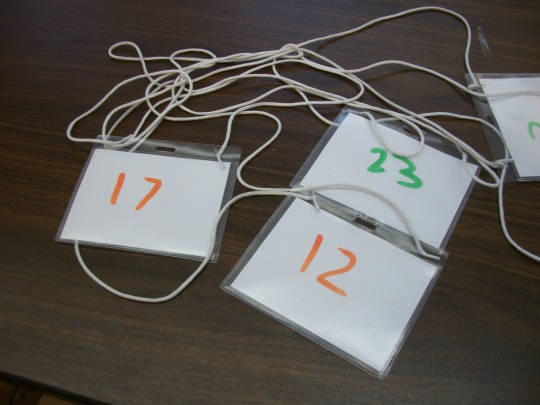 I gave them all badges as they entered class with a number on it. They got them totally interested in what the numbers were for, but I just expressed the need for patience. When it was time to use them, they were interested.

We played it twice. First to practice their ability to read Set Builder notation, write it, and translate into roster notation. I would display the sets in Set Builder on the board, giving each set a location, and they would have to move to that part of the room. But it’s up to the people in each set to make sure they have everybody that belongs there, since I would check if a whole set was correct, and so the stronger students were forced to help the lost ones to get their points. I would give a point to the first set to complete itself. The interesting thing is, because the sets change, though the points are per team, really they are individual. I didn’t give a prize, but they didn’t seem to care.

In the second part, to practice unions, intersections, and complements, I just left 6 pre-defined sets on the board:

Then for each round, I would write on the board something like O ∩ P goes to the front of the room and (O ∩ P) complement in the back, so they had to think a little bit more for this round.

It All Fits Together